More On Our Story-  here

October 4, 2012: SMART  contractors continue rail road demolition at Gallinas Creek train bridge. This may be a violation of their use permit. More

The City of San Rafael has been battling with environmentalists and concerned citizens for over six years over plans to develop a giant indoor soccer complex on a privately owned wetland/below sea level airport. The site sits on or near endangered species habitat, violates Caltrans restrictions on locating a youth play field near an active airport runway and numerous other quality of life issues for long time nearby residents. Recent news reveals that the San Rafael City Mayor, Gary Philips, has had an ongoing business relationship with the airport owners, triggering an investigation by the Fair Political Practices Commission, a state agency that strives to enforce objectivity in policy decisions.

Not only has Mayor Philips displayed the appearance of conflict of interest but so has one of the city’s planning commissioners, Larry Paul, an architect who was hired by airport owner Joe Shekou to design the main building for the soccer project. Blatant disregard for the democratic underpinnings of elected government is made all the sadder with the investigation of yet another city council member, Marc Levine, who is under investigation for failing to report his wife’s income on his recent bid to run for the state assembly. Levine also took a $1000.00 campaign contribution from the same airport developers. Are the endangered species in this troubled battle doomed? Maybe not, but the City of San Rafael reveals its clear intentions at every step of the way. Check out this email which was mistakenly sent to a Gallinas Creek activist from 2005 from then City Manager Rod Gould. 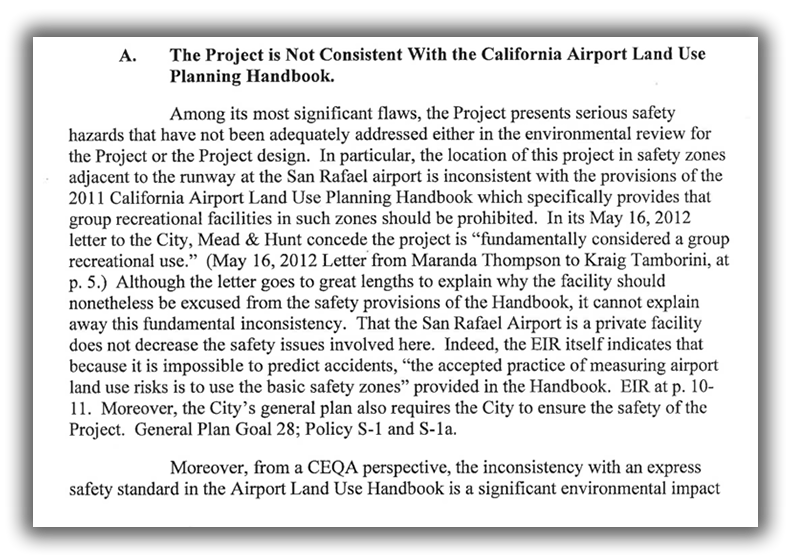 The above is an excerpt from a recent letter by environmental law firm, Shute, Mihaly and Weinberer, LLP.  This letter provides expert testimony and amplifies many of the public comments the City has thus far ignored. Reading this letter, it is apparent the City is bending policies to fit the project, instead of actually measuring the project against policies designed to protect the environment and safety. Specifically:

The EIR erroneously concludes that Clapper Rails will habituate to human activity and since they can be observed at the site, they must be thriving. These conclusions are unsupported opinions of the EIR preparer. CEQA does not allow the City to rely on bare opinions, and this shortcoming is eloquently pointed out in expert testimony included as Attachment C
Likewise, Climate Change impacts have not been adequately considered. Specifically the project requires the project to maintain their levees in a fixed position even though it is feasible, and likely environmentally preferable, to move those levees landward over time as sea level rises in order to preserve vital habitat.

Last, but not least are aviation safety issues. The City’s attempt to dismiss as a threshold of significance the prohibition of group sports facilities in runway safety zones because the Airport Land Use Handbook does not regulate a private airport is improper and not supported by CEQA case law. Similarly, the City’s contention accident risk is less than significant because they will try to limit field occupancy and post a few more exit signs is improper. These proposed mitigations neither reduce the risk of an accident or demonstrate the carnage from such an accident would be reduced. Other problems associated with the project itself being an obstruction to the safety of aviators are also not dealt with improperly by the EIR.

The letter opens and closes with a request the City Council deny this project. It’s a shame City Staff and the Planning Commission have not reached the same recommendation.

This letter is essential reading for anybody wishing to stay informed about the Airport Sports Facility. Although lengthy, many of the pages are evidence in the form of studies and documents being formally added to the administrative record.

Reading the actual letter (12 pages) and reviewing exhibits A, B, C and D ( 7 diagrams and nine pages total) are most important.

The full text of the letter and attachments can be found here: